The empathy of marmalade cats

Watching the BBC news story about how a street cat named Bob adopted a homeless, drug-addicted busker and turned his life around set me thinking about the abilities of marmalade cats like Bob.

A few years ago my parents' small elderly Jack Russell dog came to live with us as she had gone blind and they could no longer cope with her. She arrived in September, and settled in well, enjoying walks along the lane, sniffing all the while, so that even if she couldn't see, she was still aware of her environment.

However, within a few weeks it was apparent that she was developing canine dementia, and as her condition deteriorated the previously enjoyed walks became a bit of a trudge for her. No longer able to manage more than a hundred yards and back, she plodded along with no interest in her surroundings at all. In fact, one neighbour commented that she was well past it and wasn't long for this world.

Despite her frailty she still enjoyed small meals and treats, and loved being cuddled, spending much of her time curled up on my lap.


One day we opened the door to go for her usual short walk, and found a marmalade cat on the step. He was one of two which had been playing in the garden for a few weeks, then one had vanished completely, and the other was rarely seen. Now there he was, on the step. Seeing the dog he raised up, hissed and spat at her, and swished a paw with claws extended across her muzzle. She, being blind and with no sense of smell, was unaware of him and suffering a scratch cried out in pain and shock. But unlike other dogs, she didn't react by attacking her attacker. The cat was puzzled. He crept forward and sniffed her, and seemingly realised that this was a sick dog.

As we set off for our short amble along the lane, we heard to swish of a tail and the patter of small paws, and there, walking alongside the dog was the marmalade cat. When she stopped, he stopped; when she strayed he gently nudged her back on course; all the while trotting along quietly beside her until we returned to the house.

Thereafter, each time we opened the door to take her for a walk the cat was there, and he accompanied us on the walk. Finally, at the end of January our little dog stopped eating, and having been advised by the vet that the time had come to say goodbye, we sadly made the necessary arrangements.

The next time we opened the door, the cat was there again, but seeing no dog he just turned and walked away and did not return. He had done his job lending a helping paw to our old girl in her last few weeks. 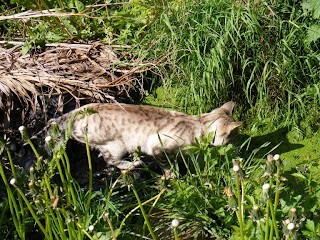