Disparaging other candidates: playground behaviour or grown up debate?

I am truly shocked at reading the attacks on Jeremy Corbyn by the other candidates,  Andy Burnham, Yvette Cooper and Liz Kendall, as reported widely on the BBC and in other media.

Mr Burnham, Ms Kendall and Ms Cooper need to take note that under the Code of Conduct for the Leadership Election, to which they agreed by standing, no candidate or any member of their campaign team is permitted to "to disparage or brief against any other candidate". *

And the Code also says in respect of the election process, "This does not preclude candidates undertaking press, Radio or TV interviews, though under no circumstances should any candidate disparage any other aspiring candidate." **

This is a grown up leadership election and candidates should not be name-calling like children in the schoolyard. If candidates cannot behave like decent human beings then they are not worthy of the support of party members and are guilty of bringing both the Labour Party and the election process into disrepute. 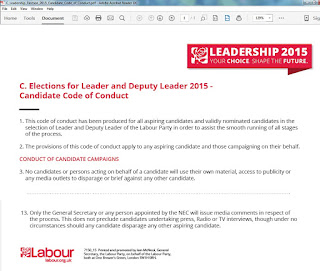