Do you remember those plastic tulips with soap powder?

A chance sighting whilst searching the old census on a family history hunt triggered a memory from my childhood. The entry was for a man in St Luke's, Finsbury, Middlesex and his occupation was shown as  Traveller Artificial Flowers.  I was instantly transported back to my grannie's kitchen over 50 years ago. Grannie loved flowers and used to go to the town's annual flower show and buy up as many as she could afford. She adored dahlias and chrysanthemums best of all and would arrive home with armfuls of pompoms, buttons, and queen mum's hats (as we used to call them).  I would be pressed into service sat at the big kitchen table covered in newspaper to protect it from the damp of the flowers, removing the string and paper they were wrapped in, snipping the stems the right length for her big vases - always with a diagonal cut at the bottom of the stem to allow more water to be absorbed by each bloom.  Sometimes an earwig would run out from amongst the petals and I would shriek. She'd laugh and tell me not to be "ser daft", it wouldn't harm me, it'd be more "frit" (frightened) of me than I was of it.  I was never convinced and still dislike earwigs in the house. Once all the stems were trimmed and the blooms were arranged in their vases they would be displayed with great pride on the sideboard, and all the wrappings would be burned in the open fire.

Grannie only bought flowers when they were cheap, she'd go at the end of the show and buy up what other folks didn't want. In between times she had vases of plastic tulips on display instead.  Although I loved real flowers, especially the silky feel of the petals as I was trimming and preparing each stem, I didn't like the plastic tulips.  Back then artificial flowers were nothing like our modern ones. Now it is hard to tell fake from real at times, so much have they developed, but the plastic ones were a horrible thick plastic.  Yet, when I was a child they were everywhere, apparently women used to buy the soap powder just to get another tulip. I really disliked them!

I have been searching everywhere online for a picture of the tulips, and the only one I have found is this one, which makes them look nicer than I remember them...  I suspect these are later versions, not the very early 1960's ones I remember! There were also plastic daffodils, which must have been even worse as I don't remember Grannie having those at all! 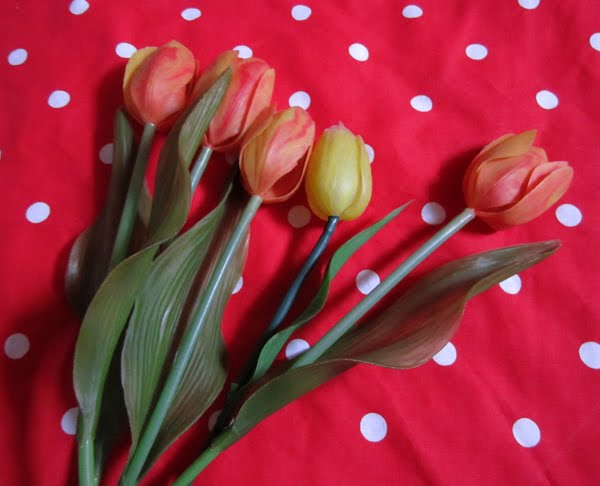 However, I was incredibly surprised to discover, when reading an obituary online for the late husband of my friend Angela in New Zealand, that it was he who introduced these things to the world of marketing via his job at Lever Brothers in the early 1960's.  I had met Andrew, decades after his Lever Bros. days, when he was back in the UK for a family wedding and he and Angela stayed with us for a couple of days. Andrew and I enjoyed great political discussions during their stay, but there was no hint that he was the man responsible for those childhood horrors!